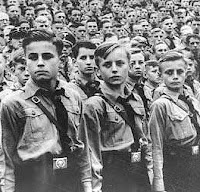 Dennis Prager on who has authority over the unwashed and their children :

One of the major differences between the Right and the Left concerns the question of authority: To whom do we owe obedience and who is the ultimate moral authority?

For the Right, the primary moral authority is God (or, for secular conservatives, Judaeo-Christian values), followed by parents. Of course, government must also play a role, but it is ultimately accountable to God, and it should do nothing to undermine parental authority.

For the Left, the state and its government are the supreme authorities, while parental and divine authority are seen as impediments to state authority.