Every year SMUSA disappoints , and apparently the SMU administration are not helping them learn. Outspoken Professor Mark Mercer speaks his mind:


... once we all knew that it was SMUSA and not Saint Mary’s that had interfered with the expression of opinion on campus, I received an email message from Colin* saying that he takes the incident very seriously. He didn’t say whether he was for it or against it or what he intended to do....
...The continuing important story, then, is the administration’s implicit refusal to comment on the matter.”
*(SMU president Colin Dodds)

Of course, if you've been paying attention, you know of the many other examples - not limited to students- on other Canadian campuses like Queens, York, Calgary ,UBC, Ottawa.. the list goes on. We've even garnered some international attention!

Are these students/university free-speech travesties - anomalies, or a symptom of general societal disease? I freely submit it's endemic to Canadian society. The public schools teach it. The governments support it. Canadians seem to be able to live with it.

Hey Folks! What happened to "True North Strong and Free"!! Edited out?

The Search For Harper's Heart Continues...


We have laws that prohibit theft of property, not because thieves don’t need a change of heart, but because it is the task and responsibility of the government to bring justice to those who do wrong.

Canada is not served by polit 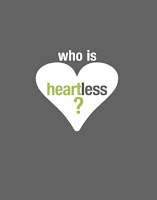 icians who shirk those responsibilities. This latest attempt by Stephen Harper and the Conservatives to duck an issue they fear is another clear indication that the abortion issue will never be discussed in the House of Commons under their watch.

On the 38th anniversary of the infamous Roe vs Wade decision, President Obama reaffirms his support for abortion, the largest killer of African Americans :

Today marks the 38th anniversary of Roe v. Wade, the Supreme Court decision that protects women's health and reproductive freedom, and affirms a fundamental principle: that government should not intrude on private family matters.
I am committed to protecting this constitutional right. I also remain committed to policies, initiatives, and programs that help prevent unintended pregnancies, support pregnant women and mothers, encourage healthy relationships, and promote adoption
And on this anniversary, I hope that we will recommit ourselves more broadly to ensuring that our daughters have the same rights, the same freedoms, and the same opportunities as our sons to fulfill their dreams.

(via The Clarion Ledger )


The cause of life endures today in large part due to the vigilance of all those Americans who, led by Nellie Gray, travel to Washington each year at this time to march and pray for the protection of the unborn. These efforts--aimed at restoring the damage of the Roe decision--must continue. Americans love life as much as we love freedom. These two founding principles are intertwined and form the basis of our national character. Without respect for life, freedom is in jeopardy.

Could there be more of a contrast?

Tomorrow those working together to bring forth life,sustain life,and protect life, will March For Life in Washington, as they have been doing annually since 1974.

If you can't be there to lend your physical support, pray for the end to abortion. Find an hour a week in front of the Blessed Sacrament and deluge Heaven with your petitions. Share your devotion to God's creative power with your family, friends, and neighbours. Support the next '40 Days For Life' in your area. Sponsor a prolife group. Subscribe to Life Media . Help a pregnant teen. Love.
at 12:33 PM No comments: