Obama IS Not KING

What do North Americans know or care about the struggles of Lebanon? How has the perception of that struggle changed ovr the last 10, 20, 30 years? Why?

There are a lot of significant events to take interest in around the world, nearly all of which I am totally unqualified to comment upon. However, since I visited Lebanon as a Catholic pilgrim in Feb. 2006 during a window of stability, I am interested.( We were one of THREE pilgrim groups in 30 years, a particular mission of Fr. Augustine Aoun to show Lebanon as the holy land of the bible.)

"Because the governor (Kathleen Sebelius)has now rejected his pleas and her public stand constitutes a scandal to the faithful, the archbishop said that he has now directed her to refrain from receiving Communion." (CWN)
at 12:36 AM No comments:

I wish someone would take an interest in this.
Conrad Black does an excellent summary of why we should be paying attention:

"The treaty of Lisbon — which would substantially amend the legal underpinnings of the European Union — establishes the priority of European legislation over that of formerly sovereign national parliaments; gives new impetus to a common European foreign and security policy; and takes a giant step toward Eurointegration, which most Europeans don’t want." 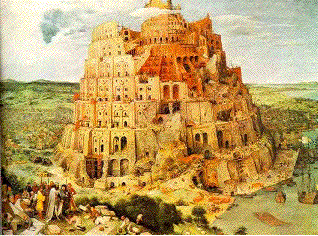 An essay by Stephen Gray gives us something to think about:

“History fails to record a single precedent in which nations subject to moral decay have not passed into political and economic decline. There has been either a spiritual awakening to overcome the moral lapse, or a progressive deterioration leading to ultimate national disaster.”(Douglas MacArthur)

Oh, but if only we WOULD learn from history! I think I'll choose... um...Spiritual Awakening!


"My mind withdrew its thoughts from experience, extracting itself from the contradictory throng of sensuous images, that it might find out what that light was wherein it was bathed... And thus, with the flash of one hurried glance, it attained to the vision of That Which Is."
(Saint Augustine)
at 11:16 PM 1 comment:

Terry O'Neill has posted a review of MSM coverage of yesterday's March For LIfe in Ottawa and across the country (Canada). Not surprisingly, it was practically impossible to find any.
And people go to university to learn this?
at 5:40 PM No comments:

I thought this website was very professional and informative. This seems to be a very active pro-life organization !
at 2:50 AM No comments: 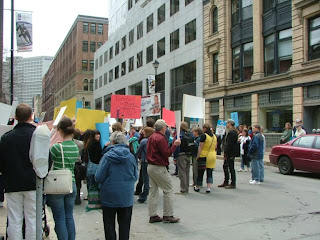 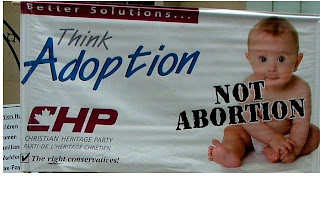 Pictures of MY SON & WIFE, MY MOM & DAD, and others in front of the legislature in Halifax.


Big Blue Wave has the latest updates on the 2008 March for Life today.


Peter Ryan comments on the Fredricton March for Life. (Peter has his Right-to-Life office in the building BESIDE the Morgentaler Clinic!)
at 12:40 AM 1 comment:

Funeral For the Unborn 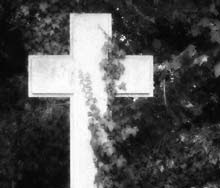 On Sat. May 3, Bishop John Quinn held a funeral for 25 aborted babies, recovered from behind a dumpster. Fr. Frank Pavone writes:

"This is no ordinary funeral. There are still too many of our fellow citizens who don’t even acknowledge that the people who will be buried this Saturday are people at all. To mourn their deaths publicly, therefore, is not just to honor them, but to sound a wake-up call to our nation that we are living amidst the biggest holocaust of all time. That is why I have called upon my brother priests nationwide to bring to the attention of their congregations this weekend that children are being buried who were brutally, legally killed, and that the killing has to end."

Bishop Quinn happens to be our Bishop, in the Cayman Islands, as we are under the 'administration' of the Diocese of Detroit - and I can't express how grateful I am for this good shepherd.
at 7:23 PM No comments:

Looking for news on Myanmar,I happened upon a fellow who bests Al Gore at the 'blame game'- although its a pretty close race!

YANGON, Myanmar, MAY 5, 2008 (Zenit.org)
- The aid agency Caritas Internationalis is at work in Myanmar, where the death toll is nearing 4,000 after Saturday's pounding from Tropical Cyclone Nargis.

Caritas is coordinating relief efforts for its 162 national members and working with staff in the region. But they said communications to Myanmar have been severely affected and a clear picture of the devastation is yet to emerge.

Caritas Internationalis Emergency Response Team Leader Dolores Halpin-Bachmann said, "There is an urgent need for access to aid workers to the affected areas so that we can assess the damage, start to provide food, shelter, clean water and medical assistance.

"We've only been receiving sketchy reports, but they're enough to make us concerned about the humanitarian situation. Nagris hit a major city with a population of 5 million people. In that environment, we know how important it is for people to get access to clean water to stop the spread of disease.

"Caritas knows from experience that the first few days are crucial to saving lives. Following the Asia Tsunami in 2004, hundreds of thousands of lives were saved because of the rapid and effective response of the humanitarian community in the early phase of the emergency. The government must do all it can to help aid workers respond."

The death toll could reach 10,000 as there are still thousands of people unaccounted for./ 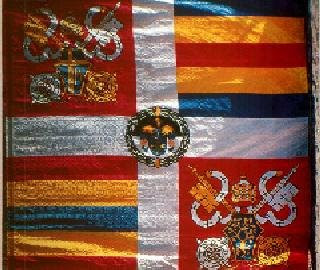 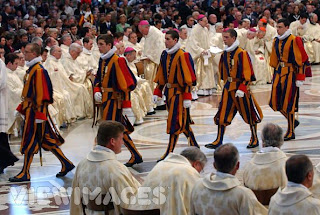 " The San Damaso Courtyard of the Apostolic Palace will be filled on Tuesday evening with close to 100 of the Pope’s Swiss Guards decked out in their 16th century black, red, and yellow dress uniforms. The occasion for the guards’ en masse appearance is the oath swearing ceremony of 33 new recruits for the papal guard." more...
at 9:02 PM No comments:

"The House of Representatives on Thursday passed a Senate-approved genetic discrimination ban that now heads to President Bush for his signature. The bill bars employers and health insurers from discriminating against individuals on the basis of their own or their family members’ genetic information." more...
at 10:18 AM No comments:

Watch Out - Here Comes the Backlash!

Now, here's a group of highschool kids I can admire. They are standing up for their right to receive an education free of propaganda!:

Kids and teachers are encouraged on DOS to disrupt the school day by refusing to speak in class as a show of support to students who self-identify as “GLBT” (No, GLBT has nothing to do with bacon, lettuce and tomato; it’s liberalese for “gay, lesbian, bisexual and transgender”)...

... this year, something extraordinary happened on the way to the brainwashing. Kids at schools all over the country stood tall and said, “Enough is enough!” Untold thousands of students participated in a peaceful, pro-family counter effort called the “Day of Silence Walkout.”

In unyielding defense of God’s design for natural human sexuality, marriage and family, these gutsy kids stayed home from school on DOS (with their parents’ permission) and let school officials know why. Some of them even participated in peaceful prayer rallies outside school in support of sexual morality and purity.

The DOS Walkout was an overwhelming success and far exceeded the expectations of the dozens of participating pro-family organizations, such as Concerned Women for America (CWA)."

Kids with some moral fortitude. HURRAH!
at 10:04 AM No comments: