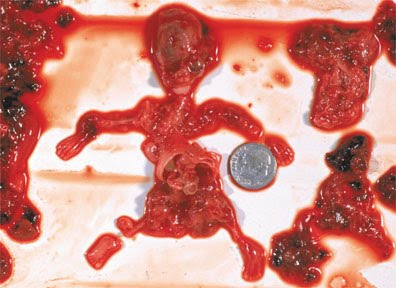 "For years and years the government has funded abortions, supplied abortions, paid for them (since I started paying taxes) with my money. It wasn’t done in my name. And frankly, I don’t love the blood on my hands. In fact, this group was started so that women like you wouldn’t be the only ones to stand up at the time of the Morgentaler anniversary, to make a claim of “victory for women’s rights” as if you spoke for women everywhere. See, here’s the problem. You and your friends have been purportedly “representing” me in politics and the public square for quite some time. But you never did. It was frustrating, yes..."

If you have found yourself frustrated by the radical culture of death presuming to 'represent' you, in the name of 'all women', check out ProWomanProLife , and add your name to the "Not In My Name" list...

Incrementalism And The Intent Of John Paul II

This has been an interesting week. In between homeschooling children and my Mother-in-law's visit, I have been participating in a family e-mail discussion about the 'correct' interpretation of Evangelium Vitae regarding the morality of supporting legislation about abortion that is not ideal.

In Canada, unlike just about the whole rest of the world, there is currently no law on the books either allowing or disallowing abortion. On the other hand, abortions are publicly funded. (So its as if abortion were equivalent to any other 'allowable' medical procedure). A proposed law forbidding abortion after 20 weeks, was not supported by Campaign Life Coalition, and its failure to make it through the process into law, is at least partially attributed to CLC, by supporters of the bill.

I thought the article by Paul Tuns in 'The Interim' was pretty good, but it was really the 'jumping off' spot for our whole discussion, with some arguing that CLC's reasoning was incorrect 'theologically' and was merely a matter of strategy - therefore not a good enough reason to forestall 'progress'. Others argued that CLC was correct in strategy, and that also, support of the bill would not be acceptable as incrementalism (as per JPII).

In support of the latter viewpoint I would like to highlight a particular concern of mine, which JPII mentions :

In other cases, it can happen that carrying out certain actions, which are provided for by legislation that overall is unjust, but which in themselves are indifferent, or even positive, can serve to protect human lives under threat. There may be reason to fear, however, that willingness to carry out such actions will not only cause scandal and weaken the necessary opposition to attacks on life, but will gradually lead to further capitulation to a mentality of permissiveness.

Its the morality we are discussing. I am not convinced that the proposed law is an incremental change that is either 'good' or 'moral'. Perhaps I do not have a good enough understanding of this, Evangelium Vitae (par#73-74) , and/or Canadian law. (Very probable!)

As much as I am able to discern positively thus far, can be summarized: we are not the only ones who have differing views in spite of equal commitment to life and the Catholic faith.

...Both Fisher and Rowland emphasized that Church teaching is “very underdeveloped” in this area. Bishop Fisher had attended a symposium in Rome on Evangelicum Vitae 73 in February of 2004....
....Bishop Fisher said that at this symposium two top notch, orthodox theologians presented completely opposite views and neither could be considered “wrong” in light of current Church teaching (although Fisher privately agreed with one over the other). The bishop noted that only about 9 scholarly works exist on the subject and that he has read them all. In other words, there is, as yet, no authoritative interpretation of EV 73 to guide us.

This exercise is all positive. Its something that faithful believers do... try to develop their understanding of God's will in their lives. I am immeasurably grateful that I belong to such a family.

However, if anyone one knows of the existence of an 'authoritative interpretation' of EV 73 to guide us, I would also be grateful!