Commentary on the Dawkins/Hitchens hysteria about the Pope:

This is what drives their war against religion: an instinct for ridiculing those who still, unlike contemporary secularists themselves, have an overarching outlook on life and a strong belief system. That is really what they find so alien about the Catholic Church in particular – its beliefs, its faith, its hierarchy. An atheism utterly alienated from the mass of humanity and from any future-oriented vision can only lash out in an extreme and intolerant way against those who still seem to have strong beliefs: the religious, or the ‘deluded ones’, as the New Atheists see it.

(viaProEcclesia)
at 7:13 PM No comments:

U of Calgary : Letter from Alumnus

The fact is that Albertans are overwhelmingly in favour of protection
under law of unborn children from any form of violence against them,
whether attacked by knife-wielding boyfriend of the mother, or the
forceps and cutting devices of an abortionist. Lack of protection for
the child in Canadian law, however, should not deter a discussion of
law, with life or death implications, especially at institutions of
higher learning. Surveys favouring protection of unborn children range
from 75% to over 90% in Alberta, depending how the question was asked.
Albertans understand that the unborn children have a high probability of
suffering death from lack of law in Canada and they want the situation
changed.

As a former unborn child, if the present state of lawlessness was
present when your mother carried you in her womb, perhaps you'd have
been the victim. Instead, you can thank her on Mothers Day. I urge
you, on behalf of Albertans and unborn children everywhere in Canada, to
put your best instincts into action to stand up to the radical leftists
who protest that conversations may not be held on U of C campus on this
subject. Take the steps to establish a civilized dialogue at U of
Calgary about the rights of children to be kept alive until their birth.

The young people you have allowed to be persecuted by Student Union,
radical leftist university staffers and professors, should be treated
with respect, if not with awe, for their courage in defense of voiceless
victims. Two hundred thousand per year is the rate at which innocent
babies die in Canada. Are they dying for population control, to please
United Nations? Canada needs more people, not less! Is their cause of
death an ideology that has no right or wrong? Since when does Canada
not have a conscience? What is the university doing to discover why
babies have to die, when over 100,000 couples per year apply to adopt a
child? What a crime, that no Canadian babies are available for adoption
because of no protection in law during gestation.

Surely, expelling your best and brightest students does not add to a
solution for the brutality of abortion. I say best and brightest
because they are the ones who see the issue clearly and have the ability
to express for the unborn, in a thought-provoking and articulate manner,
that God-given rights are violated and lives are unnecessarily taken,
when institutions like yours become blind and heartless. 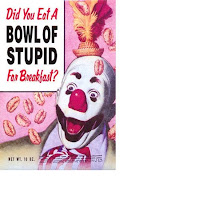 The University of Calgary 'powers that be' are so determined to keep a puritanically abortion welcoming atmosphere at their school, that they can't allow a dozen or so students to continue attending...in case they educate someone about the ugly reality of abortion while on campus:

The University of Calgary has taken its war on free speech to a new front, charging its own students with "non-academic misconduct" for having erected a pro-life display on campus on April 8.

The group has put up the GAP display, which compares abortion to past historical atrocities through the use of graphic images, on the University of Calgary grounds without incident eight times since 2006.

In 2009, the university charged six students with trespassing in relation to the display, but the crown prosecutor stayed these charges prior to a trial scheduled for November 2009. The university has threatened participating students with non-academic misconduct charges on the occasion of each display, but this is the first time they are following through with their threat.

UofC has attempted to force the club to turn their signs inwards so they are not facing passersby, but CPL has refused to comly. Leah Hallman, CPL's president, told LifeSiteNews (LSN) that UofC's demand “is essentially saying that we can speak as long as nobody can hear us, we can show images as long as nobody can see them.”

Hallman explained that on April 8th campus security ordered them to turn their signs inward, but they refused as they always have. Then security told them to leave the campus and the students again refused, “knowing that we have the right to be there.”

UofC is charging the students with having failed to comply with an order from campus security, but according to Hallman, “campus security has no right to censor our ... legitimate free speech.”

No, they're not backing down, and short of being physically carted away by U of C campus security, they'll continue their fight, steadfast in their belief they live in a society where speaking out is a right, not a privilege.

History will not remember what illegitimate excuse they used, other than as a derogative footnote; but history will remember their transgression against freedom, and it is upon this that posterity shall judge them.

So let the university do whatever action their twisted worldview sees fit, for we fear not the judgment of tyranny.

see also:
Calgary Circus School (part one)
U of C Student Leaders Embarrassingly Conformist
at 12:45 AM No comments: