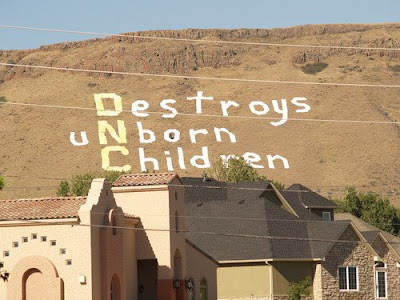 A running list of Bishops active in rebutting Nancy Pelosi's amazingly ignorant misrepresentation of Catholic doctrine is provided at TeDeum.
at 10:07 PM No comments:

Ahead of the Game

Beldar Bloglists his previous posts on Sarah Palin:
"I'm enthused — and oh-so-pleasantly surprised! — about John McCain's choice of Alaska Gov. Sarah Palin to be his running mate, for all of the reasons stated in my previous posts about her [and new ones, which I'll be adding to this table as I write them)..."
at 2:42 AM No comments:

Proecclessia:
"And when it came to picking a running mate, Sen. McCain didn't go "safe". He went BOLD ... picking a female governor with real accomplishments in taking on and winning against government corruption within her own party. The REAL fresh face in this election belongs to Gov. Sarah Palin. Inexperienced? As Mark Levin points out in my earlier post, Gov. Palin has more executive experience in her 2 years than Senators McCain, Biden, and Obama combined..."

Te Deum:
"Let me ask this: If then Gov. Bill Clinton of Arkansas, at 46 years of age, was experienced enough to be elected president, then why would anyone question the competency of a 44 year old Governor from Alaska to serve as Vice President..."

BigBlueWave:
"Palin proved her pro-life credentials in a powerful way earlier this year year when she gave birth to her fifth child, born with Down Syndrome, despite receiving pressure from doctors to abort. At a time when a vast majority of Down Syndrome children are aborted..."

CatholicMom:
"Fasten your seat belts. We're in for a very bumpy ride..."

And for your daily dose of sardonic humour - Scrappleface:
"..Sen. Obama, who chose an elderly white man name Joe Biden as his running mate rather than his rival Sen. Hillary Clinton, said he avoided picking Mrs. Clinton 'to spare her the humiliation that John McCain plans to impose on Sarah Palin.'

'The only way she’ll be able to break into the old-boy network of the presidency,' said Sen. Obama, 'is over John McCain’s dead body. McCain is literally the man who stands in her way.'"

O.K. I'm envious. The American campaign is going to be sooo much more fun than the Canadian one!
at 1:12 AM No comments:

Our 18 yr. old is guarding the house from Gustav...by himself! We (hopefully) get back to Cayman on the 15th, but meanwhile he's the guy in charge. We're hoping Gustav will not turn into an 'Ivan'!
at 8:27 PM No comments:

Email ThisBlogThis!Share to TwitterShare to FacebookShare to Pinterest
Labels: Cayman

McCain has chosen Gov.Sarah Palin (Alaska) as his running mate:

"By making Palin just the second woman to win a spot on a major party's presidential ticket, McCain has "clearly served notice that this campaign is going to wage a strong effort for women voters," Ann Lewis, a senior adviser to Sen. Hillary Rodham Clinton of New York, told USA TODAY."

The Republican ticket is looking like a good bet for Christians. I am very pleased to find they have such a fine example of woman/mother/Christian/politician all rolled into one. Makes Biden look a little weak...

Wells vs Levant - Canadians to Pay

"It’s not Wells’s first time using the CHRC to prosecute his hatred for Christians. They’re a perfect fit for each other, Wells and the CHRC. Wells drives around town, uttering anti-Christian filth; the CHRC staff surf around the Internet, publishing racist and anti-gay filth. It’s surprising that the CHRC hasn’t hired Wells to be one of their online hatemongers – he could do what he loves, and get paid for it.

Wells is a favourite of the CHRC. He has used the CHRC to harass the Christian Heritage Party. And he was the complainant against Fr. Alphonse de Valk and Catholic Insight magazine, that drained them of $20,000 in legal fees. That complaint was dismissed by the CHRC when they started getting political heat over it, but Wells is now appealing that dismissal.

Between making little Catholic children cry at church and filing nuisance suits, where does the man find the time?

His complaint against me is rooted in my recent republication of Rev. Stephen Boissoin’s editorial column in the Red Deer Advocate several years ago. That was the column in which Rev. Boissoin expressed his Christian opposition to gay rights – and it resulted in a complaint filed against him at the Alberta HRC. After five grueling years of bureaucratic bullying, Rev. Boissoin was sentenced to a $7,000 fine, a lifetime ban against giving any public sermons that were “disparaging” to gay rights (he was also banned from sending private e-mails about the subject) and he was actually ordered to publicly renounce his religious beliefs on the subject. Seriously – read the sentence here for yourself if you can't believe it.

I republished Rev. Boissoin’s column in full, as a sign of my freedom and as an indication that I don’t grant the government the moral authority to tell me what I can or can’t say. I’m pleased to say that Canada’s leading gay lobby, EGALE, agrees exactly with my position. They know that Wells’s fascism is an embarrassment to their cause. And – more than an embarrassment – it endangers anyone who might be the target of an overweening state, like gays themselves were in the past..."

Good to know that the Canadian tax dollar is being used to the benefit of us all, so effectively. Again.
at 3:27 PM No comments:

What Would I Do To Protect My Daughters

NOT give them the HPV vaccine for starters:

"The New England Journal of Medicine posted two articles this week that asked why two human papillomavirus vaccines have been so widely distributed given their unproven effectiveness and high costs.

Gardasil by Merck Sharp & Dohme, which has already received tremendous criticism for the severe and fatal side-effects experienced by users, and Cervarix by GlaxoSmithKline were the two drugs called to question.

As reported by the New York Times, Dr. Charlotte J. Haug, editor of The Journal of the Norwegian Medical Association, whose editorial appeared in Thursday's issue of The New England Journal, said, 'Despite great expectations and promising results of clinical trials, we still lack sufficient evidence of an effective vaccine against cervical cancer. With so many essential questions still unanswered, there is good reason to be cautious.'

Its gratifying to know that the CRTC has no qualms about ads that are untruthful and potentially dangerous.. and that Canadian politicians are willing to risk our teenage daughters health by funding programs to vaccine girls in school with unproven drugs -for the sake of some illusory gains with the electorate.

My girls are not in government schools. Nor are my boys. Its not worth the risk to hand them over to people who don't give a fig about their welfare.
at 2:47 PM No comments:

No Room For Morality in Medicine - Huh?

"It is profoundly troubling to observe something as personal as the right to live by one's conscience superceded by the collective right to medical services, which is not the least bit endangered in this instance.

There is no justification for accusing a doctor of professional misconduct for acting within the bounds of conscience. Any woman, for instance, whose doctor refuses to refer her for an abortion can turn to the Yellow Pages to find agencies willing to help her.

If the College enacts this policy, it will mean that doctors will leave Ontario, further adding to the physician shortage there, according to Saskatchewan MP Maurice Vellacott, who has introduced a private member's bill, C-537, which would amend the Criminal Code to protect health-care workers' conscience rights.

"The policy jeopardizes or blackmails doctors," says Vellacott. The College's motivation to draft the policy came, Vellacott says, not because of a complaint filed with the provincial human rights commission against a doctor, but rather as a means of pro-actively preventing such complaints.

Last week, the U.S. Department of Health and Human Services put forward a regulation to protect doctors and other health-care professionals from being fired or losing their certification if they refuse to provide services that run counter to their personal beliefs.

Health and Human Services Secretary Michael Leavitt described the regulation as "protecting the right of a physician to practise medicine according to his or her moral compass." Planned Parenthood Federation of America Inc., objects to the regulation, saying it risks compromising women's ability "to manage their own health care" because of politics and ideology.

The real ideology at work is one that dictates an individual is not entitled to freedom of conscience if they do not morally support a pet liberal cause. The College should be protecting doctors' rights to live by their consciences, not aiding and abetting human rights commissions in sacrificing those rights on the altar of political correctness."
(h/t bigbluewave)

It occurs to me, that if the doctors remove 'morality' entirely from their profession by disallowing the practice of morality by their own peers, they become purely purveyors of technical skills, and should no longer be allowed the 'special' status that has afforded them an elevated place in our society. They will not warrant our trust. Ironic, that at the very moment they wish to eliminate any pretense of 'caring', they are also trying to lock themselves in as the sole arbiters of life and death, the only authority on rubrics of human value.

Its a power grab, and they are not the 'good' guys.


Go for it Ontario - the rest of us can certainly use more GOOD doctors!!
at 11:13 AM No comments:


MR. RUSSERT: You have changed your position on abortion. When you came to the Senate, you believed that Roe v. Wade was not correctly decided and that you also believed a the right of abortion was not secured by the Constitution. Why did you change your mind?

SEN. BIDEN: Well, I was 29 years old when I came to the United States Senate, and I have learned a lot. Look, Tim, I’m a practicing Catholic, and it is the biggest dilemma for me in terms of comporting my, my religious and cultural views with my political responsibility. And the decision that I have come to is Roe v. Wade is as close to we’re going to be able to get as a society that incorporates the general lines of debate within Christendom, Judaism and other faiths, where it basically says there is a sliding scale relating to viability of a fetus. We can argue about whether or not it’s precisely set, whether it’s right or wrong in terms of its three months as opposed to two months, but it does encompass, I’ve come to conclude, the only means by which, in this heterogeneous society of ours, we can read some general accommodation on what is a religiously charged and a publicly-charged debate. That’s the, that’s the decision I’ve come to.
( Meet The Press, 4-29-2007)