"One of the problems of journalism's objectivist paradigm is that there are million of events -- published daily as news -- that are of no use. They are ephemeral, vacuous and gobble up what is really essential. French writer Jean Guitton entitled one of his books "Silence sur l'essentiel" (Silence on the Essential). Often in the informative landscape there is silence on the essential and clamorous noise on the accidental and ephemeral.

Info-ethics calls, in the first place, for speaking about what people really need to know to be free and to struggle for their dignity. It is a different informative choice, but entails a radical change: from the 'agenda setting' to the recipient."
at 8:04 PM No comments: 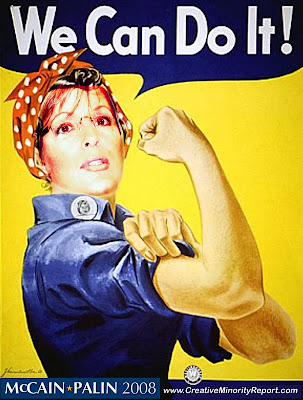 Email ThisBlogThis!Share to TwitterShare to FacebookShare to Pinterest
Labels: fun? 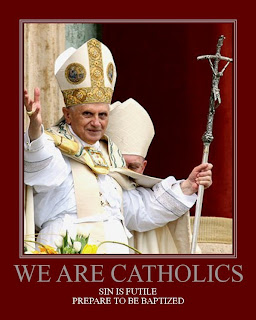 
The story goes on to say thast the Bishop will not be honouring such politicians by asking them to speak at Catholic schools - whether they get elected as V.P. or not, and refers to Bishop Saltarelli's 2004 document to that effect.
at 5:35 PM No comments:

"Bristol Palin, one of Palin's five children with her husband, Todd, is about five months pregnant and is going to keep the child and marry the father, the Palins said in a statement released by the campaign of Republican presidential candidate John McCain.

Bristol Palin made the decision on her own to keep the baby, McCain aides said.

'We have been blessed with five wonderful children who we love with all our heart and mean everything to us,' the Palins' statement said.

'Our beautiful daughter Bristol came to us with news that as parents we knew would make her grow up faster than we had ever planned. As Bristol faces the responsibilities of adulthood, she knows she has our unconditional love and support,'the Palins said."
(h/tprowomanprolife)
at 5:25 PM No comments:

"An orchestrated campaign against my Private Members Bill C-484, the Unborn Victims of Crime Act, has now been followed by my own government’s announcement that they will unveil new legislation that will include a victim’s pregnancy as an aggravating factor when judges consider sentencing offenders

This response is politically predictable and misses (intentionally, I am sure) the entire point of my Bill..."

".. One of my most vocal critics has literally said this: “If the fetuses are recognized in this bill, it could bleed into people’s consciousness and make people change their minds about abortion.” My reaction was, “if opponents are really worried about this, their issue is not with C-484 but about protecting their ideology at all costs.” If their ideology can’t withstand people thinking about what that ideology actually involves, how secure are they in their position? "

"Media bias is no stranger to pro-lifers and people with authentic Christian values who face it all the time. The peacock network, MSNBC, didn't waste anytime throwing a sucker punch against Governor Palin. Look carefully at the "Breaking News" banner Fox News captured from MSNBC as Gov. Palin was giving her speech: It reads, 'How many houses does Palin add to the Republican ticket?'.."

We can take it. We aren't dependent on the mainstream media for actual information. They're getting more and more like supermarket rags - all colour, no content.
at 5:09 PM No comments:

The money bounce may owe to Palin's appeal with conservative donors, many of whom said privately they had planned on sitting out the campaign this year. The money comes in just under the wire -- after McCain accepts the GOP nomination Thursday, he will accept public funds and no longer be permitted to raise private money for the campaign.

That will not, however, stop McCain and Palin from raising money for the Republican National Committee. In coming weeks, McCain will host four megafundraising events in major cities aimed at bolstering the accounts of the party. Palin, meanwhile, will be sent out to headline more than a dozen fundraising events for the RNC.

All's Well at Home, as Gustav Moves On

Hurricane Gustav left Grand Cayman and the Sister Islands virtually unscathed as it heads through the Gulf of Mexico towards Louisiana . For Caymanians, unscathed is relative to the devastating damage perpetrated by Ivan in September 2004. The Islands have just finished recovering, and noone is taking hurricane warnings lightly .

We were nervous about having our son Edward alone at home during the storm, but his preparations on the house, and in the Adoration Chapel were well done. Although we made out o.k., we continue to pray for our neighbors in Jamaica and those who suffer in Haiti.

Back to the Culture Wars

"..The Palin selection indicates that the McCain campaign wishes to sharpen this contrast. A few months ago, it was widely thought that this election would leave behind the red-state/blue-state Bush elections. Instead of cultural politics, there would be personality politics. McCain, the noblest war veteran in America, versus Obama, the anointed one who would heal the planet and calm the oceans. It would be a new kind of election.

Then surprises. The man of change, Obama, chose the safest, most insider running mate imaginable, Joe Biden. The old man, McCain, went with the groundbreaking outsider. It is all upside down, but the result will be a campaign quite familiar. In a culture war election, Governor Palin will be a not-so-secret weapon."
at 12:57 AM No comments: