"Can Humanity Survive Without Religion?"

Kind of an interesting discussion at The Corner. Mark Krikorian asks what the future of society can be without at least SOMETHING to believe in. Can hmanity even survive, long term, without religion? John Derbyshire responds with "Plenty of civilizations — China and Japan, to name two — have got along for millennia without it.".

Seems to me that this is a question only a non-believer would waste any time on at all.

Surely the 'survival' of humanity depends on God?
at 11:35 PM No comments: 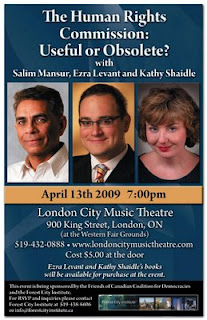 Kathy Shaidle, Ezra Levant and Salim Mansur spoke at a 'free speech' event in Canada last week. A Catholic, a Jew and a Muslim explain to Canadians the dangerous restriction of freedoms being imposed by Canadian Human Rights Commissions.

Kathy Shaidle has published her entire speech on her site, and Roy Eappen has video coverage on his site.

Although this was a Canada specific event, it certainly isn't a unique problem. Human rights commissions around the world are doing their best to force 'correctness' on unruly citizens. Freedom is no longer a Western value, but a hindrance to Western governments seeking to align their legislation to conform to UN standards of 'proper belief'. That 'proper belief' would include state imposed syncretism, and total submission to the 'culture of death'. One writer at Brussels Journal concludes that we are now 'post democracy', citizens having become subjects in a 'global' construct run by 'expert elites'.

One wonders who ultimately will remain to benefit , and what the benefits will be in a soulless world of no democracy, no free speech, no children, no elderly, no families or marriage, and no faith?

Encouraging, if for no other reason than the joy of witnessing free expression, are the recent 'tea parties' in the US. Having followed this idea/event online since its inception a few months ago, I can state positively that there is a broad range of political and other 'beliefs' represented by these protesters. Something democratic has been unleashed, and the surest sign of this is the reaction of the media. (Even David Frum can't bring himself to really like the protests - not quite up to his standards of 'articulation'!)

Its going to take a lot of tea to reverse the stifling effect of the 'latte' drinkers, but is it impossible?

Books worth reading:
Tyranny Of Nice- Kathy's book
ShakeDown- Ezra's new book on his HRC experience.
America Alone by Mark Steyn
at 3:30 AM No comments:

Gays have won significant victories in the last couple of weeks. First, there was the unanimous decision by the Iowa Supreme Court to legalize same-sex marriage. There have been other top state court decisions but they were always 5-4, barely enough to win. It was also the first state to take this step in the Midwest.

Second, Vermont not only became the first state to legalize gay marriage by the Legislature, but also without pressure from a court case, as in Massachusetts. Third, the governor vetoed the bill, but the Legislature overrode the veto.

Fourth, the Washington DC City Council voted unanimously last week to recognize same-sex marriage performed elsewhere. All recognize this is a half step toward legalization.

However, I believe the battle will ultimately be won by supporters of traditional marriage. Remember that the Germans were ahead in 1943.

Take Iowa, where the Supreme Court declared there was no "constitutionally adequate" justification to prevent "same-sex marriage" Iowans disagree. A February 2008 Iowa Poll showed 62 percent of Iowans believe marriage should be only between one man and one woman, with only 32 percent saying it should not.

Who will lead the opposition? Start with religious leaders.

Within hours, Iowa's Catholic bishops "strongly disagreed" with the decision, calling it "unwarranted social engineering" weakening the relationship between marriage and parenting. "This decision rejects the wisdom of thousands of years of human history. It implements a novel understanding of marriage, which will grievously harm families and children," they wrote. The rights of marriage "are not something that the state creates or may redefine."

Religious leaders have had many victories hardly mentioned in recent weeks. In California, for example, evangelicals joined Catholics to lead a 52-48 percent victory for Prop 8's limit of marriage to joining a man and woman. And that was the 30th state constitutional amendment limiting marriage to heterosexual couples. Only three states have gay marriage.

Maggie Gallagher, President of the National Organization for Marriage, quotes Vaclav Havel saying "Truth and love will prevail over lies and hate." She adds, "On that basis Havel took on the Soviet empire. Where is the invincible empire now?"

"Same sex marriage is founded on a lie about human nature: 'There's no difference between a same-sex and opposite sex unions and you are a bigot if you disagree.' Political movements can - sometimes at great human cost and with great output of energy - sustain a lie but eventually political regimes founded on lies collapse in on themselves."

She asks, "What does losing marriage mean? First, the rejection of the idea that children need a mom and dad as a cultural norm...Second, the redefinition of traditional religious faiths as the moral and legal equivalent of racists. The proposition on the table right now is that our faith itself is a form of bigotry."

The Washington Post, hardly a conservative paper, published examples recently: "A Christian photographer was forced by the New Mexico Civil Rights Commission to pay $6,637 in attorney's costs after she refused to photograph a gay couple's commitment ceremony.

"A psychologist in Georgia was fired after she declined for religious reasons to counsel a lesbian about her relationship. Christian fertility doctors in California who refused to artificially inseminate a lesbian patient were barred by the state Supreme Court from invoking their religious beliefs in refusing treatment.

"It really is all about religious liberty for us," said Scott Hoffman, chief administrative officer of a New Jersey Methodist group, the Ocean Grove Camp Meeting Association, which lost a property tax exemption after it declined to allow its beachside pavilion to be used for a same-sex union ceremony. "The protection to not be forced to do something that is against deeply held religious principles," reported the paper.

This sort of honest reporting will awaken a sleeping giant, millions of Americans who believe deeply in traditional marriage and who resent any trampling of people because of their deeply held religious convictions.

Wednesday's Washington Post even published a column by 1,000 retired generals and admirals who argue that if Obama repeals the law stating that homosexuality is incompatible with military service, it "would prompt many dedicated people to leave the military."

They cite a poll that 10 percent would not reenlist and 14 percent would consider leaving. Even the lesser number means 228,600 would exit, more than all active-duty Marine Corps.

Some battles have been lost, but this war is not over.


(Michael J. McManus is a syndicated columnist writing on "Ethics & Religion". He is President & Co-Chair of Marriage Savers.)


I think that something not discussed much in this debate, is the injustice of redefining marriage to suit a group that wants to usurp its 'meaning'. Same-sex marriage is all about 'pretending' to be an actual married couple.

Advocates of same-sex marriage need to step back and face themselves in the mirror. They will see someone willing to take away from someone else what they themselves can not have. Same sex marriage does not make two men or two women married. It makes marriage meaningless. Its purpose cannot be to accomplish the physically impossible. The real purpose must be to exact a price on society for a non-crime ...namely not being able to fabricate a heterosexual normalcy for gay couples.