Feast of the Chair of Saint Peter

“Blessed be the God and Father of our Lord Jesus Christ, who in his great mercy gave us a new birth to a living hope through the resurrection of Jesus Christ from the dead...” (1 Peter 1:3a). 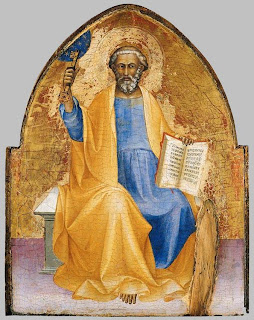 
...Which was, then, the "cathedra" of St. Peter? He, chosen by Christ as "rock" on which to build the Church (cf. Matthew 16:18), began his ministry in Jerusalem, after the ascension of the Lord and Pentecost. The first "seat" of the Church was the Cenacle, and in all probability in that room, where Mary, the Mother of Jesus, also prayed with the disciples, a special place was reserved for Simon Peter.

Subsequently, the see of Peter was Antioch, a city situated on the Oronte River in Syria, today Turkey, which at the time was the third metropolis of the Roman Empire after Rome and Alexandria in Egypt. Of that city, evangelized by Barnabas and Paul, where "for the first time the disciples were called Christians" (Acts 11:26), Peter was the first Bishop.

In fact, the Roman Martyrology, before the reform of the calendar, established also a specific celebration of the Chair of Peter at Antioch. From there, Providence led Peter to Rome, where he concluded with martyrdom his course of service to the Gospel. For this reason, the See of Rome, which had received the greatest honor, received also the task entrusted by Christ to Peter of being at the service of all the local Churches for the building and unity of the whole People of God.

In this way the See of Rome came to be known as that of the Successor of Peter, and the "cathedra" of its Bishop represented that of the apostle charged by Christ to feed all his flock. It is attested by the most ancient Fathers of the Church, as for example St. Irenaeus, bishop of Lyon, who in his treatise "Against Heresies" describes the Church of Rome as "greatest and most ancient, known by all; … founded and constituted at Rome by the two glorious Apostles Peter and Paul"; and he adds: "With this Church, because of her outstanding superiority, the universal Church must be in agreement, that is, the faithful everywhere" (III, 3, 2-3).

also at American Catholic
at 4:10 AM

Email ThisBlogThis!Share to TwitterShare to FacebookShare to Pinterest
Labels: Saints