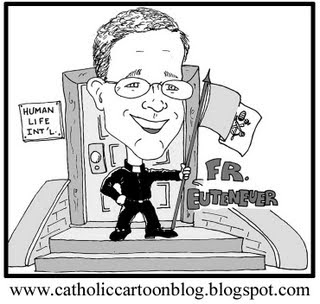 Father Thomas J. Euteneuer is on a mission. President of Human Life International, Fr. Euteneuer has traveled the world, speaking to and motivating workers for the 'Culture of Life'. His organization has offices in eight countries, and Fr. Eutenueur has inspired and informed thousands in the war against the 'culture of death'.

Impressively media savvy, Fr. Euteneuer can be found in the 'social media' on Facebook and Twitter, and HLI has an impressive website with links to many resources including podcasts . Father also produces an insightful weekly commentary that keeps up with the latest 'life' news.

Fr, Euteneuer's straight-talk gets a passionate response from both friend and foe. He calls out the hypocrites and encourages the faithful . He tells it like it is, unvarnished. The hard truth.

Time will tell whether the 'blunt reality' approach works better than the 'polite everlasting discussion' approach.

My money is on Father Euteneuer! 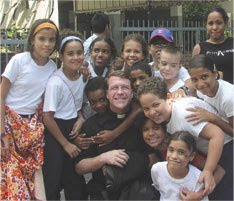 (Fr. Euteneuer and other Catholic speakers are being featured around the blogosphere, organized by Matt Warner at Fallible Blogma.)


UPDATE: Since this post, Fr. Euteneuer has been removed from HLI, the Diocese of Palm Beach, and his work as an exorcist. It has not yet been made public the reason why, but prayers are in order.(01/30/11)