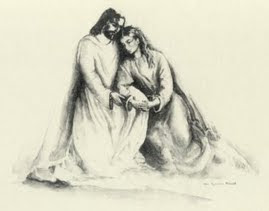 Pray for post-abortive women who cannot forgive themselves; may they understand that there is no condemnation for those who are in Christ Jesus.

Blessed are those whose lawless deeds are forgiven, and whose sin is covered. Blessed is the one to whom the Lord shall not impute sin.

In the passage above, the Apostle Paul making a point about justification by faith, refers back to David's words in Psalm 32:1-2. In spite of the enormity of David's sin -- adultery with Bathsheba and his murder of her husband -- and the utter absence of any personal merit, David in his brokenness, understood the imputed righteousness of God. David's response was not continued guilt over his sins, but praise for his freedom from guilt, and God's power to live life differently.

Once your relationship with God has been restored, your guilt has served its purpose and should no longer be given place in your life. This is true regardless of the sin, including the sin of abortion. As a post-abortive woman, I too struggled with this issue until I realized that punishing and hating myself after receiving God's forgiveness was an insult to God.

It was as though I were minimizing Christ's work on the cross as insufficient to cover my sin. I was denying Him the opportunity to bring glory to His name for the healing and restoration He wanted to do in my life. I was giving victory to the enemy who having lost the battle for my soul, was bent on destroying my testimony as I accepted the continual guilt he heaped on my mind.

It is my joy to continually sing of God's grace rather than give the devil a foothold in my life. Don't waste God's mercy! Accept His forgiveness and forgive yourself as testimony of His amazing grace.

Our Most Gracious Heavenly Father, thank you for your amazing grace that saved a wretch like me. I come against the enemy of my soul who would have me feel cast down and dejected. Lord, keep your children from falling prey to the accusations of the father of lies. Turn our mourning into dancing and may we bring praise to you as we give testimony of Your healing and restoration in our lives. For by His grace we are saved, amen.

Email ThisBlogThis!Share to TwitterShare to FacebookShare to Pinterest
Labels: 40 Days For Life, abortion, culture of life