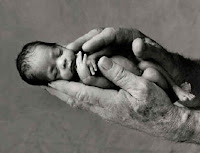 "The good thing about an Obama presidency is that we now have a face to put on the genocide of African-American babies in this country." (Clenard Childress Jr., senior pastor of New Calvary Baptist Church in Montclair, N.J.)

Lynn Vincent writes about increasing awareness of the toll abortion has cost the African-American community:

...Earlier this year, an ASU professor invited Adetunji to address her students on the topic. "The professor knew some of her students had faced, or were facing, crisis pregnancies," said Adetunji, a pastor's wife who has lately assumed the mantle of pro-life activist. "She wanted a way to get them some help in making better decisions, better choices." ...

....Adetunji is among a growing number of people working both to educate African-Americans about the truth of pregnancy and the ravages of abortion, and to increase compassionate outreach to black women facing crisis pregnancies. And with an African-American becoming president, some urban pro-life activists say the time to draw national attention to the steep toll of abortion on blacks is now....