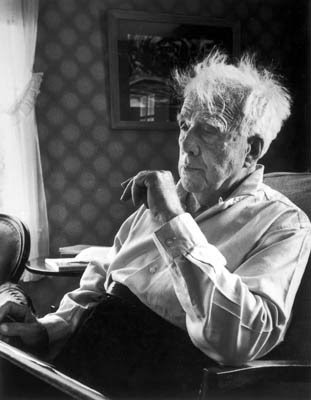 I know this because, as homeschoolers, we were reading some Frost and the biography at the beginning of the volume. Then we googled a poem we couldn't find in our little collection - 'The Gift Outright'. What we found was this very informative entry that led us to the poem Frost had written for JFK's inaugeration - 'Dedication'.

Summoning artists to participate
In the august occasions of the state
Seems something artists ought to celebrate.
Today is for my cause a day of days.
And his be poetry's old-fashioned praise
Who was the first to think of such a thing.
This verse that in acknowledgement I bring
Goes back to the beginning of the end
Of what had been for centuries the trend;
A turning point in modern history.
Colonial had been the thing to be
As long as the great issue was to see
What country'd be the one to dominate
By character, by tongue, by native trait,
The new world Christopher Columbus found.
The French, the Spanish, and the Dutch were downed
And counted out. Heroic deeds were done.
Elizabeth the First and England won.
Now came on a new order of the ages
That in the Latin of our founding sages
(Is it not written on the dollar bill
We carry in our purse and pocket still?)
God nodded his approval of as good.
So much those heroes knew and understood,
I mean the great four, Washington,
John Adams, Jefferson, and Madison
So much they saw as consecrated seers
They must have seen ahead what not appears,
They would bring empires down about our ears
And by the example of our Declaration
Make everybody want to be a nation.
And this is no aristocratic joke
At the expense of negligible folk.
We see how seriously the races swarm
In their attempts at sovereignty and form.
They are our wards we think to some extent
For the time being and with their consent,
To teach them how Democracy is meant.
"New order of the ages" did they say?
If it looks none too orderly today,
'Tis a confusion it was ours to start
So in it have to take courageous part.
No one of honest feeling would approve
A ruler who pretended not to love
A turbulence he had the better of.
Everyone knows the glory of the twain
Who gave America the aeroplane
To ride the whirlwind and the hurricane.
Some poor fool has been saying in his heart
Glory is out of date in life and art.
Our venture in revolution and outlawry
Has justified itself in freedom's story
Right down to now in glory upon glory.
Come fresh from an election like the last,
The greatest vote a people ever cast,
So close yet sure to be abided by,
It is no miracle our mood is high.
Courage is in the air in bracing whiffs
Better than all the stalemate an's and ifs.
There was the book of profile tales declaring
For the emboldened politicians daring
To break with followers when in the wrong,
A healthy independence of the throng,
A democratic form of right devine
To rule first answerable to high design.
There is a call to life a little sterner,
And braver for the earner, learner, yearner.
Less criticism of the field and court
And more preoccupation with the sport.
It makes the prophet in us all presage
The glory of a next Augustan age
Of a power leading from its strength and pride,
Of young amibition eager to be tried,
Firm in our free beliefs without dismay,
In any game the nations want to play.
A golden age of poetry and power
Of which this noonday's the beginning hour.


The land ws our before we were the land's.
She was our land more than a hundred years
Before we were her people. She was ours
In Massachusetts, in Virginia,
But we were England's, Still colonials,
Possessing what we still were unpossessed by,
Possessed by what we now no more possessed.
Something we were withholding from our land of living,
And forthwith found salvation in surrender.
Such as we were we gave ourselves outright
(The deed of gift was many deeds of war)
To the land vaguely; realizing westward,
But still unstoried, artless, unenhanced,
Such as she was, such as she would become.


I shudder to think of the let down Robert Frost would experience, if he were alive today. On the other hand, I would appreciate the chance to read a poem written about America today by Robert Frost. He understood about 'higher purpose' and 'glory'. He loved the America that the soldiers are fighting for in Iraq.