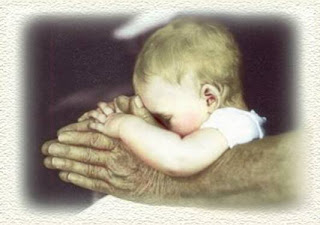 May God's people understand that the Lazarus of the 21st Century is the unborn child, and respond accordingly.

There was a rich man who was dressed in purple and fine linen and lived in luxury every day. At his gate was laid a beggar named Lazarus, covered with sores and longing to eat what fell from the rich man's table. Even the dogs came and licked his sores.

The time came when the beggar died and the angels carried him to Abraham's side. The rich man also died and was buried. In hell, where he was in torment, he looked up and saw Abraham far away, with Lazarus by his side. So he called to him, "Father Abraham, have pity on me and send Lazarus to dip the tip of his finger in water and cool my tongue, because I am in agony in this fire."

But Abraham replied, "Son, remember that in your lifetime you received your good things, while Lazarus received bad things, but now he is comforted here and you are in agony. And besides all this, between us and you a great chasm has been fixed, so that those who want to go from here to you cannot, nor can anyone cross over from there to us."

The rich man did not go to hell because he was rich. He went to hell because he ignored the other man. He thought that because Lazarus had less that he was worth less. He failed to recognize that Lazarus was his brother. Lazarus was waiting at the door of the rich man for scraps of food; the Lazarus of our day, the unborn child, is waiting at the door of the womb for birth itself. God does not only prohibit aborting the unborn; he prohibits ignoring them.

Father, I thank you for the life that I possess, and for the birth that you granted me. I hear the cries of the Lazarus of our day; I see them sitting at the door. Grant that I may never ignore them, and that through this 40 Days campaign, I may stir many others to pay attention to them as well. Through Christ our Lord. Amen.