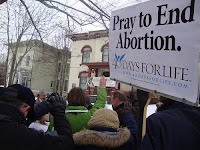 A record crowd of 120 turned out for the kickoff of the fifth 40 Days for Life campaign in Syracuse.

Coordinators noted that the Planned Parenthood facility in Syracuse was the first freestanding abortion center in the United States.

“We are thrilled to be here and do God’s work and bring His light and love and mercy to this darkest corner of our city,” Jeannie, one of the coordinators, told the crowd.


"For we do not wrestle against flesh and blood, but against principalities, against powers, against the rulers of the darkness of this age, against spiritual hosts of wickedness in the heavenly places. Therefore, take up the whole armor of God, that you may be able to withstand in the evil day and having done all, to stand."