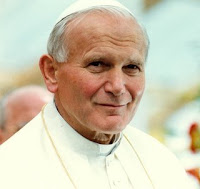 "Polish congressman Artur Gorski has asked the country’s Minister of Sports, Tomas Lipiec, to name the new soccer stadium being built for the Eurocup 2012 tournament in Warsaw after Pope John Paul II.
During a press conference, Goriski said, “The presence of the Holy Father will remind fans of their obligation to behave correctly during sporting events and not riot.”
“There is no other public figure as important as John Paul II,” the congressman said. His Law and Justice Party has proposed that the venue be called the John Paul II Stadium, the EFE news agency reported.
Construction of the stadium has not yet begun, although officials in Warsaw are confident the venue will be ready in time for the 2012 soccer tournament.'
at 7:23 PM