What's In It For Morales? 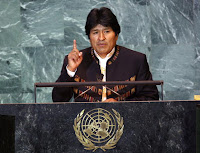 Watching the Bolivian President 'ratchet up' the tension between the government and the Church, one wonders about the underlying motivation. Relationships between government and Church have historically been tenuous. Why the increase in hostility?

I think it's the company Morales is keeping. He wants to institute repressive measures that increase his power and diminish the voice of the people. This will allow him a free reign to institute new laws which the people would object to....for example, those promoting homosexuality and abortion.( Any guesses where that idea comes from? THE UN!!) What is he getting out of this betrayal of the people? POWER AND MONEY. Unfortunately for him, the Catholic Church insists on continuously pointing out what he's up to, and what the Catholic Church's moral teachings are, just as they did with previous governments. Funny how similarly repressive gov't from the far left and gov't from the far right are. I guess if the main goal is POWER AND MONEY, repression is a given! Fronts for the spread of communism like the 'World Social Forum' are seeing the current economic crisis as an opportunity to gain power throughout South America. They would have an easier time, if they could just shut up those darn Bishops!

Evo Morales sees the Church as a major impediment to the reforms he seeks to institute. (Not the promised land reforms that got him elected...the undemocratic 'repress opposition' and the immoral 'kill off the poor' reforms.)So much so, that he is calling for the 'institution' of a new 'church'. (Sounds a lot like communist China, doesn't it?)

This must be quite a problem for the President of the United States. He personally believes in homosexuality and abortion . He wants to be everybody's friend. Yet, it's obvious that the South American countries flirting with communism are not governed by democracy loving men. How to control the outcome without interfering? How to protect the UN mission to reduce the populations of poor people worldwide through abortion and homosexuality, without increasing the power of uncomfortably close neighbours who are tyrants that hate the US?

Well, could you be a bit more specific...?