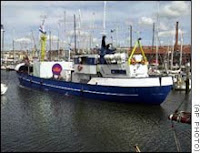 Here's one for the history books. The EU Human Rights Court has decided that Portugal contravened 'article 10' by refusing to allow the 'floating abortuary' to enter its harbours in 2004 - when abortion was illegal in Portugal.

... Abortionist and foundress of the "Women on Waves" project, Rebecca Gomperts, said she is delighted with the finding. "We shall use the judgment for new campaigns outside Europe," she said.

In 2004, the abortion ship was denied access to Portuguese ports by politicians and the courts. Portuguese officials ordered two naval vessels out to ensure that it would not enter Portugal's sovereign waters. At that time, Portugal had some of the strongest legal protections for unborn children anywhere in Europe.

The Court unanimously decided that there was a breach of Article 10 of the European Convention on Human Rights. The court ruled that in seeking to prevent disorder and protect public health, the Portuguese authorities could have resorted to other means that were less restrictive of "Women on Waves'' human rights. Article 10 is the section of the Convention dealing with "expression"...

How did the group instituted after WWII to prevent further human rights calamities become so separated from reality? A floating baby killing business has human rights? Talk about depreciating the value of a human right!

Can't wait to see whose sovereignty "Women on Waves - Baby Assassins" attacks next!! (Any bets as to who this group gets big funding from??)
at 2:12 PM