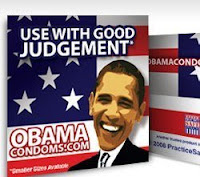 ...liberals so love condoms that one of the first things President Obama did as President was to force American taxpayers to ship condoms to everyone outside the United States -and in case that didn't work there's always abortion.

So now that the United States will be throwing enough money to cover every other country in the whole world in synthetic rubber, I'm guessing the liberals began feeling a little jealous and wondering what they could do to increase the supply of domestic condoms.

The answer came today. Obama is hijacking George W. Bush's Office of Faith Based Programs, renaming it, and tweaking their mission just a wee bit so that their main job will be doling out condoms right here in the good old U.S. of A. And guess what they're labeling it - abortion reduction!

Note to newly renamed Faith Based Office of whatever - contraception leads to more extra-marital sex which leads to unwanted babies which leads to more abortions. It's really not that difficult. But they don't really care about truth. Their obsession with condoms doesn't allow for truth...

More Commentary at The Canadian Republic
.
at 9:44 AM