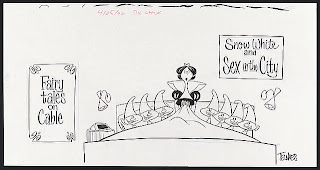 
"The statistics are pretty stark for women who sleep around as much as Carrie and friends. The writers forgot to mention at least one or two cases of genital warts, several pregnancy scares , and at least a brush with HIV infection. Yeah, they’re practicing 'protected' sex, but even smart women get 'caught.'

Forty-eight million abortions after Roe v. Wade, it’s hard to argue that we are any better at controlling our fertility today than we were thirty five years ago. Artificial birth control measures treat the fertility of the female as a problem, a biological hazard, rather than a gift and a mystery woven into the fabric of being a woman. 'Protected' sex implies that there is something wrong when a woman’s body does what it was created to do in the aftermath of a steamy session with McDreamy."
more...
at 12:08 PM