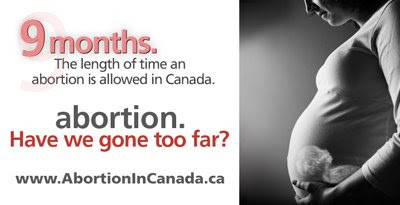 
"The decision to pull the ads was made after Hamilton's transit office received three complaints, and one of the ads was vandalized with pro-abortion graffiti. A city councilor, Brian McHattie, also personally submitted a request for the ads to be removed, saying that they were 'offensive,' and 'totally inappropriate'.

Subsequently Hamilton Right to Life, which had sponsored the ad campaign, filed a human rights complaint against the city.

Peter Boushy, a lawyer and the secretary for Hamilton Right to Life filed the complaint on behalf of the pro-life organization. He says that he now credits the complaint with having pressured the city into changing its unfair policy.

'No one wants to be labeled a human rights violator,' Boushy told LifeSiteNews.com in an interview today.

Boushy said that he and Hamilton Right to Life welcomed the city's decision, which has yet to be ratified by city council. According to an e-mail from a member of the Hamilton Public Works Committee, sent to Father Slaman of Hamilton Right to Life, the decision will come before the council on June 11.

'Coming on the heels of our complaint to the Ontario Human Rights Commission, this new decision by the Hamilton Director of Transit to allow religious and advocacy messaging in the bus shelters is healthy for a society that values freedom of expression,' said Boushy. 'We are hopeful that the decision will be ratified by city council. Now, in terms of the whole Right to Life issue, it is important that the public understand that there is absolutely no law whatsoever regulating abortions in Canada. This is a grave injustice that urgently needs to be rectified and I would urge all like-minded persons to call upon their politicians to help the pro-life movement in this regard.'"
at 2:19 PM