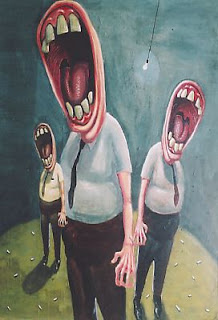 "'You have to recognize that a woman has a choice over her own body', said Comrade Massa, presumably hoping to graduate in Hilarious Cliche Studies. 'We think that these pro-life, anti-choice groups, they're sexist in nature. Is this an issue of free speech? No, this is an issue of women's rights.'

Idiocy aside, there are some problems here with what used to be known as good old hypocrisy. Just a few months ago the same young lady was one of the leaders of a campaign to allow the term 'Israeli apartheid' to be used on Canadian campuses. Jewish students and the mass of their non-Jewish colleagues considered the phrase deeply offensive when applied to a democratic country founded by victims of international racism and genocide."

I think Coren is a little generous with his projection of their 'future' occupations as accountants and developers. MAYBE highschool english teachers or CBC journalists. They will continue to need a captive audience . Plus the teachers have such a great union...!