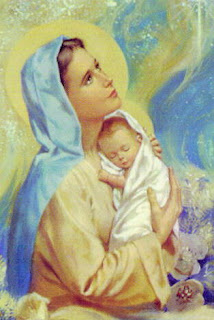 May the mystery of the Incarnation increase our zeal for defending life.

Then the angel said to her, "Do not be afraid, Mary, for you have found favor with God. And behold, you will conceive in your womb and bring forth a Son, and shall call His name Jesus. He will be great, and will be called the Son of the Highest; and the Lord God will give Him the throne of His father David. And He will reign over the house of Jacob forever, and of His kingdom there will be no end."

"God has assumed Humanity, joining it with Divinity, and kindled in men's hearts new love of me." These words were written by a Roman poet in the Fourth Century. He spent his life finding ways to express the greatest mystery of the world: the incarnation, in which God became man.

Often the womb has been referred to as the "first home of the whole human race." It is the place where life begins, where our stories start. In the womb the great men and women of history began their magnificent march through life. In the womb Divinity met humanity, and God the Son was born into the world. As one of the Fathers of the early church, St. Leo the Great, declared, "Within her spotless womb Wisdom built itself a house and the Word became flesh."

Recently, I was at the hospital for the birth of my fourth grandchild. Looking through the nursery window at the rows of newly born babies, I began to think of the great stories that would be written about these tiny lives. During his visitation with the Virgin Mary, the angel prophesied to Mary about the life of her child. Here in this hospital, I pondered, what would he say about each of these? Would they meet the one who also came from His mother's womb to redeem the world and kindle our hearts afresh for God? I thanked God for each baby alive and prayed for each story yet to be written.

Heavenly Father, you have made the womb of each woman a very special place. Help us to hold fast to the sanctity of this first home of humanity, remembering the wonderful mystery, that God inhabited the womb of a young woman and came forth as the savior and deliverer of the world. We ask this in the Name of the one who came forth, Jesus Christ our Lord. Amen.