Cardinal Giulio de' Medici (the future pope Clement VII) commissioned two paintings for the cathedral of S. Giusto of Narbonne, the city of which he had become bishop in 1515. The Transfiguration was entrusted to Raphael, and the Raising of Lazarus (now in the National Gallery of London) to Sebastiano del Piombo. The Transfiguration was not sent to France because after Raphael's death (1520), the cardinal kept it for himself, subsequently donating it to the church of S. Pietro in Montorio where it was placed over the high altar. In 1797, following the Treaty of Tolentino, this work, like many others, was taken to Paris and returned in 1816, after the fall of Napoleon. It was then that it became part of the Pinacoteca of Pius VII (pontiff from 1800 to 1823).
The altarpiece illustrates two episodes narrated in succession in the Gospel according to Matthew: the Transfiguration above, with Christ in glory between the prophets Moses and Elijah, and below, in the foreground, the meeting of the Apostles with the obsessed youth who will be miraculously cured by Christ on his return from Mount Tabor.
This is Raphael's last painting and appears as the spiritual testament of the artist. The work is considered in his biography, written by the famous artist and biographer of the 16th century, Giorgio Vasari, "the most famous, the most beautiful and most divine".
(Vatican Museum) 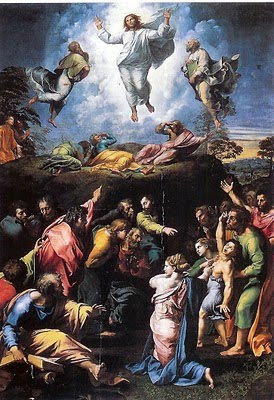