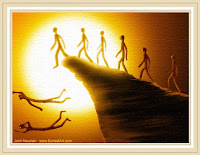 The Lemming Press strikes again. The Saskatoon Star Phoenix prints an editorial void of fact (making it fiction) and gets set straight by my Dad....

To the Editor,
'The Star Phoenix'

You really should become more familiar with International Planned Parenthood Federation (IPPF) before demanding more government support for its anti-life advocacy and 'ethnic cleansing' abortion policies. Are you aware, for example, that reducing births of certain ethnic groups and religions is central to the 'raison d'etre' of IPPF? Do Star Phoenix editors share such an abhorrent objective? Beware of IPPF lies covering up their bad policies and practices.

Knowing the answers to three questions may help The Star Phoenix editorials be balanced, truthful and fair. How did IPPF come into being? How is IPPF supported? What are IPPF's objectives?

Margaret Sanger, who founded IPPF, was a racially prejudiced socialite. She was instrumental in establishing IPPF as a non-government bureaucracy, with the primary objective of reducing births of certain undesirables, ie. blacks, latinos, immigrants, Catholics and the poor. She railed against these groups, calling them, "irresponsible breeders". IPPF continues to act in many ways against these same groups.

Planned Parenthood is expert at writing grants and lobbying governments for support, obtaining the majority of its funds this way. The public, however, does not support IPPF to any significant degree. Planned Parenthood operates the largest chain of 'for profit' abortuaries in USA, charging $700 to $1800 for an abortion. The larger the child, the more they charge to kill her. They rarely provide support for post-abortive problems, medical or psychological, sending victims off to local public health facilities.

To believe the lie that abortion is less harmful than birthing for women, one must accept Planned Parenthood's version of truth. The Guttmacher Institute claims to do independent research on life issues, but is actually an IPPF affiliate, designed to deceive legislators, judges and the public with their version of IPPF 'truth'. If you believe your role as editor is to perpetuate IPPF lies in support of the Canadian status quo (no protection whatsoever for the lives of unborn children), then, by all means, accept Guttmacher statistics, listen to Planned Parenthood and put aside contemporary medical and psychological research from impartial studies.

In fact, every honestly run study on the effect of abortion on women describes multiple increases in physical and mental risks vs non-abortive women. Risks increase as numbers of abortions per woman increases. The younger abortions begin, the worse are the effects on her future health. Set an objective reporter to do the research.

Where is concern for women, when IPPF fails to report abortions sought by under-aged girls being abused by older men or a relative, or young girls brought in by a pimp? IPPF simply kills the child for cash, keeping parents of under-aged girls and police in the dark. IPPF routinely sends women they damage to hospital emergency for repairs. Increasingly, however, Planned Parenthood's illegal and unethical operating policies are being brought into the light by a new generation of courageous young women. They tape interviews at IPPF and report 'sting' results to authorities, inspiring investigations and charges, ranging from fraud and assault to criminal negligence causing death. Many cases of abuse of women and girls by abortion providers are before the courts but are rarely reported by media. Maybe there's an editorial responsibility, especially for a newspaper purporting to support women, to report on cases of abuse of women by abortion providers?

Lastly, rather than abandoning reason by conceding that "personal choice" supersedes "human life" as highest and best good, you might consider providing a balanced life issues education for your subscribers. You may easily obtain valid life issues information by reporting objectively on interviews with local "Culture of Life" leaders. Subscribe personally to the Lifesite News online daily report. Lifesite News is a Canadian online news service, the world's foremost news source for life issues. As editor, you may find it profitable to offer a column to Maurice Vellacott, MP, thereby providing an Ottawa insider balance to any further "Culture of Death" infomercials.

(links added by me)