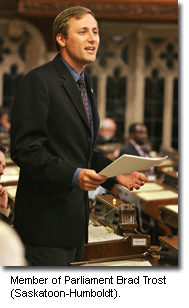 Representing 'life'in the Canadian parliament happens rarely, especially since the Conservative PM, Stephen Harper, has stated that it's not in his 'area of interest'. In a very un-'PC' manner, Conservative MP Brad Trost, is circulating a petition to stop all Canadian gov't funding of Planned Parenthood International.

...In addition to IPPF's abortion advocacy, the petition cites the fact that the organization "does not support physicians' freedom to practice according to their conscience and/or religious beliefs regarding abortion referral."

According to IPPF's 'Charter on Sexual and Reproductive Rights', physicians may only refuse to offer contraceptive and abortion 'services' "if they can refer the client to health professionals willing to provide the service immediately" (5.3). "No such right exists in emergency cases where lives are at risk," they add.

IPPF took in $119 million in 2008, with almost 80% coming from government grants. In the midst of a financial crisis, $23 million of that money went towards staffing, with over 3 dozen people given six figure incomes that topped out at $480,000.

CIDA would seem to have become a dedicated supporter of organizations that advocate de-population and actively work towards global abortion access, giving away millions of Canadian tax money. In 2007, for example, the Canadian Taxpayers Federation reported that, in addition to the money pledged to IPPF, in 2006/2007 CIDA had given $44,050,000 to the United Nations Population Fund (UNFPA) as well as $18 million to UNICEF.

While UNFPA claims that they do not promote abortion, they are an ardent supporter of abortion advocacy groups, such as IPPF, which reported in 2008 that it had received $1 million from the fund that year. In September, the UNFPA's leader, Thoraya Ahmed Obaid, called for a budget of $23 billion to be able to fund abortions worldwide.

In Trost's opinion, the government has continued funding IPPF because of "inertia." "The bureaucracy's done it before and no one wants to rock the boat," he explained. "So at the end of the day, don't make any waves. ... I'm encouraging people to let their voice be spoken so that the unelected government, i.e. the bureaucrats in CIDA who support Planned Parenthood, don't get to dictate where people's tax dollars go."...

Young and brave and committed to the good of Canada. Just what Canadians should be looking for in representation, and hopefully there are more young , brave individuals ready to run in the next election. Canada needs some new blood - red blood - that sustains life.
at 3:55 PM

Oh yes. A "real" man. One who wants to increase the number of pregnant teenagers in our communities by cutting the small funding to the only agency that provides these young people with education, information, and counselling on safe sex, birth control, hiv/aids risks, STD, preventive health,etc. If Bradley & his ilk would start supporting sex education, handing out condoms, adopting every teenage girls' baby, financially supporting these girls during pregnancy and for their child's life, instead of ranting about abortion while never addressing any of the causes, perhaps you might be taken seriously. Bradley should be ashamed of himself!

The old ruse of saying 'if you don't solve all the evils, you're not sincere about the one you're working on'.

You need better information yourself, if you believe that the Planned Parenthood Int'l has the best interests of the 'teens' at heart. Its all about population control, from their own lips.

There is no way that Canadian taxpayers should be paying for the killing of babies in other countries.

If you are sincere, perhaps you will join the Africans in trying to maintain family values and teach chastity and sacredness of marriage instead of importing western 'values' of expendable human life, and meaningless sex. (Check out the recent African Synod of Bishops statements about the same.)

For your information, the Catholic Church, who teaches sacredness of marriage and chastity and the value of each human life, is also the biggest worker with AIDS patients and orphans in Africa. That would be because its not just talk - they actually care FOR the people.

The largest cause of abortion in society is the promiscuity pushed by groups like planned parenthood. This is backed up by the number of abortions in the US since the promotion of 'sex education' PP style, and the legality of abortion.

For Catholic sex education check out 'Theology of the Body'. A proper understanding of the true value of sexuality makes much more sense, and is much more beautiful and profound than society's 'norm' of 'free-sex'- physical only, no humanity involved.

Bradley is a REAL Man, because in a country like Canada, where a large proportion of the population is ignorant of the actual facts, happy to sit comfortably with whatever propaganda is handed them rather than have to think and reason for themselves, the truth is difficult to sell. He's doing it anyway. Good for him!

Seriously, how can anyone (in this case a prime minister - one of the most important representatives of our country) say that life is not in their area of interest. That sounds so terrible. Harper should have said something different or should have said it more softly. This is just bad.