The Scandal of Badly Formed Priests

Normally I do not like to criticize the clergy. I like to pray for them. However, when a priest puts on public display his dissident beliefs it does need to be pointed out.
Here is a recent example of a badly formed priest who is president and vice-chancellor of a purportedly Catholic university, who makes a statement that is scandalous. (Even an unbeliever would realize the scandal in Fr.Paul Rennick's statement!)

...LSN sought comment regarding the school's decision to invite Cokie Roberts, a pro-abortion Catholic news analyst who has criticized the Church for preaching against homosexuality and contraception, to address the school as part of the "Christian Culture" lecture series.

Fr. Rennick told LSN that he had "personally vetted" the selection of Roberts and chose her because she was "a woman of faith," a "well known Catholic" and "successful as an individual Christian."

LSN asked Fr. Rennick, "Do you think there is a possibility of scandal from the fact that she has professed very pro-abortion views and has criticized Catholic bishops for teaching Church doctrine on homosexuality and contraception?" The President of the Catholic University replied, "No, I don't."

Asked to elaborate, Fr. Rennick said: "If you look at the catholic population, you'll find a whole variety of positions on all of those topics. It seems to me that disagreement on a particular position doesn't disqualify one from being a Catholic. Unless, of course, that position is whether Jesus is the Christ."

"Abortion is not an infallible teaching. It never has been proclaimed infallibly," he said. "This attempt to put everything that the Church teaches in this one set of categories, it seems to me, is not a proper Catholic position, not according to the history of our church," he added.

LSN sought comment about Fr. Rennick's remarks from London Bishop Ronald Fabbro who is Chancellor of Assumption University. Mark Adkinson, Director of Communications for the diocese, told LifeSiteNews.com he would not be able to have the bishop comment. Asked if there would be a better time to contact the bishop, Adkinson replied, "No, because I don't view LifeSite as a legitimate news source."...

...Catholic Organization for Life and Family (COLF) Assistant Director Lea Singh noted that the Catechism reads: "Since the first century the Church has affirmed the moral evil of every produced abortion. This teaching has not changed and remains unchangeable." (CCC 2271).

"As an 'unchangeable' teaching, it does indeed seem to be an infallible teaching," said Singh. "Over the years the CCCB has repeatedly spoken out strongly against abortion." She quoted a 1990 CCCB document which stated: "Catholic teaching on abortion is clear and unequivocal. Abortion is a moral evil because it involves the destruction of human life. Direct killing of an unborn child is never justified." ...

The scandal is clear. Fr. Rennick is in desperate need of formation, and hopefully he will get it. It is disturbing to think that people send their college students to Assumption Univ., thinking that THEY will receive a good formation! I guess there is a reason why that university did not make the 'faithful to the Magisterium' list!!

(Our two eldest have attended Our Lady Seat Of Wisdom, which IS on the list, and we can personally recommend it!)

As an aside, Mark Adkinson would serve Bishop Fabbro better if he kept up to date with his communications contacts. (That's his job, right?!) LifeSiteNews has an international reputation amongst faithful Catholic lay persons,priests,Bishops,Cardinals and academics for producing a superior Catholic news service. (Unlike some other Canadian 'catholic' productions often found in the back of churches!) 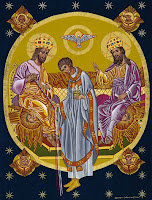 We thank you for our for our faithful priests and bishops, whose spiritual fatherhood and example of fidelity, self-sacrifice, and devotion is so vital to the faith of your people.

May our spiritual fathers be guided by the examples of Saints Peter and Paul, all the Apostles and their saintly successors. Give them valiant faith in the face of confusion and conflict, hope in time of trouble and sorrow, and steadfast love for you, for their families, and for all your people throughout the world. May the light of your Truth shine through their lives and their good works.

Assist all spiritual fathers, that through your Grace they may steadily grow in holiness and in knowledge and understanding of your Truth. May they generously impart this knowledge to those who rely on them.

Through Christ our Lord. Amen.

This is mindboggling. And sad to hear of the bishop's gatekeeper not recognizing the importance of Catholic bloggers on issues like these.

Paul Rennick should not call himself a Catholic or a Christian. He is a phony and a scoundrel. He should be excommunicated.

Great post! I really enjoy reading your blog. Keep up the good work.

I recently started a new blog that will be highlighting the dangerous advances of the secular progressive movement (pro-gay “rights”, pro-abortion, anti-religious freedoms, etc).

We’re looking to build a solid group of conservatives who’ll frequent our site regularly and contribute to some good discussions. The site gets updated daily with breaking news, so you’ll want to check back often, or you can just sign up for our News Feed.

If you’ll add us to your blogroll we’ll gladly add you to ours. Our blog is called Religion and Morality.