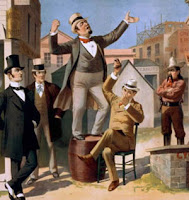 Michael Coren in the Ottawa Sun:

...Canada? It's a free country, or at least it's supposed to be. But not, it seems, if you hold a view on the abortion issue that is contrary to that of the establishment.

The abortion debate should not, however, be the point here. Any more than a discussion of free expression should be framed around party politics, religion, sports or favourite cheese.

We have the right to disagree, to argue and, short of violence, to be passionate and committed.

It's the lifeblood that should flow through any healthy body politic.

Yet abortion has become a topic that is different from any other in the world. And the examples are legion....

Of course its not just Canada that is experiencing a reduction in free speech. The US is considering the same kind of gov't control over the media that the HRC members were discusssing in Canada this week. Many European states are becoming more and more repressive. Britain is practically insane with more and more ridiculous 'rules' of 'appropriate behaviour'!

When there is no basis for justice, no belief in right and wrong, good and evil, then determination of 'appropriate behaviour' becomes subject to the whim of those with power, and more and more arbitrary. Good bye democracy.

Ever hear someone express their opinion that something said or done was inappropriate and a violation of someone's individual right not to be offended? Did they justify this opinion by saying ' free speech is important, but...'?

Everyone who understands that EVERYONE's freedom is undermined by this kind of 'fuzzy logic', needs to speak up .

Free speech - Use it or Lose it!

Interesting side-note: The Cayman Islands has finally come to an agreement with Britain and amongst its own leaders, to a draft of its new 'modernized' constitution and a bill of rights. In the process of negotiating an acceptable draft, (one where the bill of rights refers to the gov't responsibilities to its people, NOT between the people - vertical, not horizontal- and where the courts are restricted from 'interpreting' against the laws of the Cayman Islands) Canada was used frequently as an example of how it can all go SOOO wrong. It remains to be seen what Britain actually allows to be signed as the final document, but at least we hope to not repeat EVERY mistake! Not surprisingly, our HRC (why does it exist again?) is crying foul and criticizing the draft bill for not providing enough specific 'special' rights. Perhaps Cayman's HRC has the same problem as Canada's in understanding the meaning of freedom.
at 3:05 PM