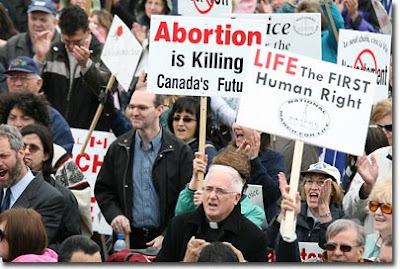 .
Archbishop Terrence Prendergast has reaffirmed his support for the National March For Life, despite the probable use of graphic images by some attendees. This comes on the heels of a statement by Archbishop Richard Smith announcing the Alberta bishops boycott of the provincial March For Life, as a protest against the use of graphic images of abortion.

Who is being a true shepherd? Can both be right?

I think if we read the balanced approach of Archbishop Prendergast we recognize that he not only supports lay people and the fight against abortion but also freedom of expression and an openminded approach to advocacy for the unborn. Contrasted with Archbishop Smith's ultimately damaging approach, Ottawa would seem to have a more trusting and trust worthy shepherd.

The Alberta bishops are particularly unhelpful and disappointing. The prolife youth in Alberta have recently been in legal difficulties at the Univ. of Calgary for using graphic images in their advocacy. The Alberta bishops are behaving as if they are too delicate to be able to understand an approach they find personally upsetting. They admit that the organizers of the Alberta MFL have not refused to guarantee no graphic images will be used, but simply cannot guarantee it. Still they boycott. They make a pretense of having serious philosophical problems with the display of graphic images, such that they cannot bear to be associated with them - that it would be WRONG to do so. This is confusing, since they say they are not interfering with the attendance of the March by their flock . Is it wrong or not?

Compared to Archbishop Prendergast's approach, the Alberta bishops look suspiciously like they are being only politically correct. Not wanting to judge the bishops, I admit there's a possibility they are merely being naive. Perhaps they are not aware that their boycott gives power to advocates FOR abortion and will be used against the ecumenical lay efforts of their community. (Can they be so naive?)

Who knows why dioceses of Canada that need particular help with faithfulness, have bishops who bring mixed messages at best.

Let us hope and pray that Canada receives the help of more and more bishops like Archbishop Terrence Prendergast (Ottawa) and Archbishop Thomas Collins (Toronto) - because Canada could surely use an upgrade in Catholic teaching and practice.