"Oh Canada, You Fell Asleep On Me" 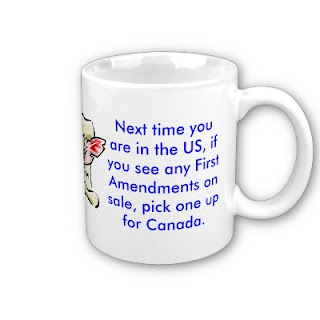 Its been an interesting week in the land of loud liberals and quiet Christians (that would be Canada). The end result of the media and public 'servant' freak out over a Catholic clergyman expressing Catholic beliefs OUT LOUD in Quebec , is that the Quebec politicians are proposing that the federal gov't ensure the safety of all Canadian ears from hearing such free speech ever ever again!

American blogger Jimmy Akin sees this whole 'out of the closet' totalitarianism of the liberals, as a cautionary tale. How long before the American public becomes as quiet and docile as the Canadian? How long before Americans undergo a 'Christian Heritage Lobotomy'?

Not long folks, not long. And if you think a 'somewhat' conservative gov't will save you, check Canada again. (What's lined up for 2010+ isn't going to be good enough.)

It remains to be seen exactly how much more of this 'in your face' anti-freedom stuff can go on in the name of 'choice', without a backlash from non-sheeples ...

Which reminds me of a Marci McDonald joke :

Not exactly original material, although its interesting that she is trying to make a buck by selling this old claptrap in Canada. No doubt she will (make a buck.) There's nothing Canadians like more than to give money to a deserving liberal.
at 2:24 PM