"Letter To The Catholics Of Ireland"

Dear Brothers and Sisters of the Church in Ireland, it is with great concern that I write to you as Pastor of the universal Church. Like yourselves, I have been deeply disturbed by the information which has come to light regarding the abuse of children and vulnerable young people by members of the Church in Ireland, particularly by priests and religious. I can only share in the dismay and the sense of betrayal that so many of you have experienced on learning of these sinful and criminal acts and the way Church authorities in Ireland dealt with them.

As you know, I recently invited the Irish bishops to a meeting here in Rome to give an account of their handling of these matters in the past and to outline the steps they have taken to respond to this grave situation. Together with senior officials of the Roman Curia, I listened to what they had to say, both individually and as a group, as they offered an analysis of mistakes made and lessons learned, and a description of the programmes and protocols now in place. Our discussions were frank and constructive. I am confident that, as a result, the bishops will now be in a stronger position to carry forward the work of repairing past injustices and confronting the broader issues associated with the abuse of minors in a way consonant with the demands of justice and the teachings of the Gospel...

George Weigel "The End Of Euphemism"

Contrast the above with the misleading article by a churlish 'Sister'Turlish at the National 'Catholic' Reporter (Someone explain to me why we still find these at the back of some churches? The by-lines read like a list of 'most bitterly unhappy dissidents' with few exceptions! I mean, really, McBrien!?)

In "Media Attacks Mounting", LifeSite News shows how some outlets had their reactions written BEFORE the Pope's letter was even released! (ESP?)

As expected, and as with everything Catholic, the reactions run the gamut from optimism to disgust. Read the Pope's letter for yourself (link above) and use the reason God gave you. Ask yourself if the purpose of the letter was to 'assuage anger', and if that would have been appropriate as a first public response.

I don't believe it would have been appropriate or possible. The Pope's letter is a public apology, an admission of guilt , and a call for reform. Its a preliminary step along a long and arduous path to renewal in the Catholic church in Ireland and hopefully, eventually, forgiveness. Eventually. Pope Benedict in his letter acknowledges how difficult forgiveness will be.

I find it curious that some of the criticism of his letter, sounds like defensiveness. 'He's blaming the Irish!'
Who is to blame for abuse in Ireland, if not those there? In America, the Americans, in Germany the Germans, in Newfoundland, the Newfoundlanders. Acceptance of responsibility must be one of the very first things for reconciliaton. The Church for her part, the clergy and religious in Ireland for theirs (a number of them Irish, yes?),the Irish seminaries and religious orders and those who knew, for their part.

I would have thought this to be rather obvious.

Let us see what the Pope's investigations produce. I am interested to see what reforms, resignations, and re-structuring may come of the process. That is now the Church's part. To pray and to wait and to support the process of reform and reconciliation, in the hope that the Church in Ireland may regain some of its former acclaim - for the glory of God.

The Four Evangelists in the Book of Kells 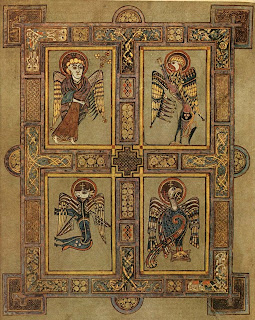