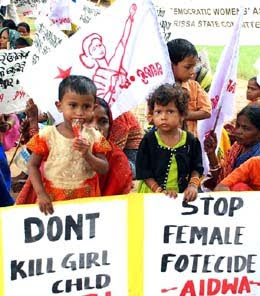 ...It is no exaggeration to call this gendercide. Women are missing in their millions—aborted, killed, neglected to death...

50m: number of girls that Unicef estimates are ‘missing’ from Indian society

1.05: males to every female in India, reversing the world average

600: rupees now, save 50,000 rupees later” is the advertising slogan of diagnostic teams with ultrasound machines that predict the sex of the unborn child

Between the two of them, China and India are raising a cohort of some hundred million men who will never know the civilizing, rooting influence of marriage...

Religion sociologist Rodney Stark has studied the link between female infanticide and the rise of the Christian church. Unfortunately gendercide is hardly a new phenomenon, as the history of pagan Rome shows. Stark believes that Christianity, which prohibits femicide, led to the collapse of pagan Rome through sheer force of numbers:

"Abortion was a huge killer of women in this period, but Christian women were spared that. And infanticide—pagans killed little girls left and right. We’ve unearthed sewers clogged with the bones of newborn girls. But Christians prohibited this. Consequently, the sex ratio changed and Christians didn’t have the enormous shortage of women that plagued the rest of the empire."
( A Double Take on Early Christianity: An Interview with Rodney Stark)

Of course, The Economist recommends implicitly state-driven solutions: “female education, anti-discrimination suits and equal-rights rulings.” South Korea has actually been educating women for decades, so that seems a moot point, and I have a surprisingly difficult time understanding how dead female fetuses and infants launch anti-discrimination and equal-rights suits. The day a magazine like The Economist calls for widespread institution of Christianity to save baby girls, or otherwise recommend that we examine politically incorrect religious trends, please let me know.

I'd like to know why its news. Really. How were people expecting the 'one-child policy' to turn out, for example? (Didn't care, as long as there were fewer Chinese?!)

Christianity alone respects women in a meaningful way, as it respects all human life. Created by God and made in His image, made sacred by the Incarnation, human life - male and female - is valuable. Because God made it so.

No-one else has as good a reason to value human life!
at 9:26 PM

Finally, someone is speaking out against this atrocious abuse of the most basic human right-- the right to live.

In my 2007 presentation at the U.N. on the subject, I was able to show, based upon the 2000 Census of the People Republic of China, that 40,000,000 women were already missing. The trend was on the upswing. Therefore, in 2010 there are already close to those 40 million bachelors who cannot find a bride.

Yet my most appalling finding was that as of 2007, female gendercide in China—the singling out of girls to death—was often acknowledge but not investigated by any of the international bodies that were supposed to do so:.

• It is not covered in Human Rights Watch’s report released January 2007
• Acknowledged in five words in the 2005 U.S. State Department report
• Gets a passing nod in the World Health Organization report
• Not mentioned in any Amnesty International reports
• Not touched in Human Rights in China organization’s projects
• Acknowledged—but not investigated—in each of 2002-2006 reports by U.S. Congressional Executive Commission on China
• —and it is not covered in the Convention of the Elimination of all Forms of Discrimination Against Women (CEDAW) publications and releases

For more facts, please check my PowerPoint presentation at:
http://www.taliacarner.com/gendercide.pdf