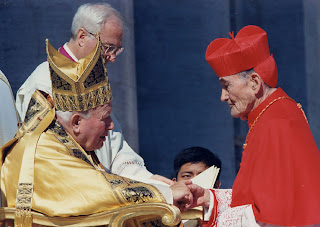 Cardinal Dulles' articles were the ones that initially attracted me to 'First Things' so its appropriate that I found this beautiful tribute to him in their
'comments' section : by Nicholas Frankovich

In the last year of his life the polio that he’d lived with since the Second World War robbed him of the ability to speak, or at any rate to speak intelligibly. He was articulate and lucid and spoke in complete sentences that it was always a pleasure to listen to. He still was, and he still did, but now some neurological error that was affecting his speech made it hard for anyone to make sense of the sounds. His long-time assistant, Sister Anne Marie Kirmse, knew him that well that she could interpret for his interlocutors. All of this he handled with supreme grace. It was admirable.

Apparently immunity to self-pity was a lifelong strength of his. In the course of a talk that involved reference to Christians who had been persecuted for their faith, he added something to the effect that he’d led a fairly easy life and didn’t know anything like persecution first-hand, and I thought: Hey, I know enough about your background to know that you fought in a war. You surprised (and probably more) family members by converting to Catholicism. As an academic theologian you’ve experienced your share of polemical vituperation. Whatever pain you experienced along the way you’re counting as negligible, petty, not worthy of being referred to at all, even if only to dismiss it? I salute you, Cardinal Dulles.

I was so used to being awed by his professional accomplishments (the dozens of books, hundreds and hundreds of articles) that it hit me when, in his introductory remarks before one of the last McGinley Lectures, the president of Fordham used the word “holy” to describe him. He was right. It’s a word we tend to be shy about applying to anyone who’s still living, but in this case it was so apt I wondered why it never occurred to me to think of Avery Dulles as that all along.

In that last year of his life, he still had things to say that we wanted to hear, and so his final McGinley Lecture was read for him by a Jesuit colleague at Fordham. His concluding remarks:

“Suffering and diminishment are not the greatest of evils but are normal ingredients in life, especially in old age. They are to be expected as elements of a full human existence. Well into my 90th year I have been able to work productively. As I become increasingly paralyzed and unable to speak, I can identify with the many paralytics and mute persons in the Gospels, grateful for the loving and skillful care I receive and for the hope of everlasting life in Christ. If the Lord now calls me to a period of weakness, I know well that his power can be made perfect in infirmity. ‘Blessed be the name of the Lord!’”