"Facism Has Come to Canada" 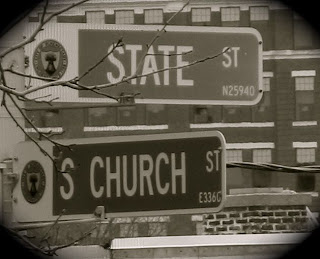 "Human rights, of course, must include the right to religious freedom, understood as the expression of a dimension that is at once individual and communitarian – a vision that brings out the unity of the person while clearly distinguishing between the dimension of the citizen and that of the believer. The activity of the United Nations in recent years has ensured that public debate gives space to viewpoints inspired by a religious vision in all its dimensions, including ritual, worship, education, dissemination of information and the freedom to profess and choose religion. It is inconceivable, then, that believers should have to suppress a part of themselves—their faith—in order to be active citizens. It should never be necessary to deny God in order to enjoy one’s rights. The rights associated with religion are all the more in need of protection if they are considered to clash with a prevailing secular ideology or with majority religious positions of an exclusive nature. The full guarantee of religious liberty cannot be limited to the free exercise of worship, but has to give due consideration to the public dimension of religion, and hence to the possibility of believers playing their part in building the social order.

Indeed, they actually do so, for example, through their influential and generous involvement in a vast network of initiatives which extend from Universities, scientific institutions and schools to health care agencies and charitable organizations in the service of the poorest and most marginalized. Refusal to recognize the contribution to society that is rooted in the religious dimension and in the quest for the Absolute—by its nature, expressing communion between persons—would effectively privilege an individualistic approach, and would fragment the unity of the person."
at 2:39 PM